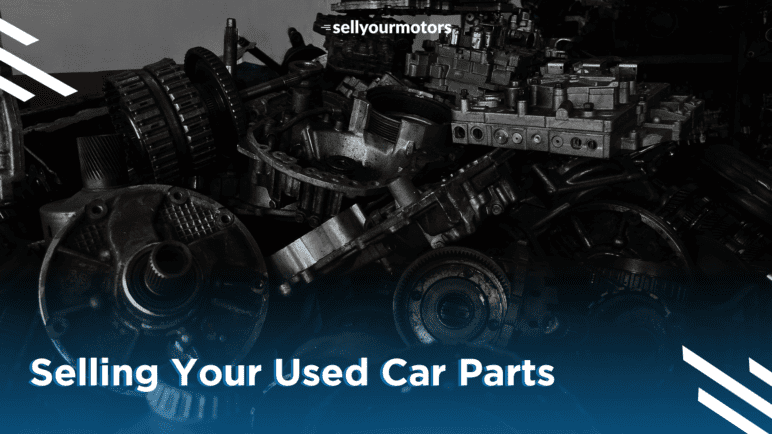 If you’re trying to sell your car and you’re convinced that there’s no demand for it, or that no one in their right mind will want to buy your vehicle, then selling your car’s parts and scrapping the car may seem like the best alternative. Navigating the car parts industry is a brave move, and this article aims to prepare you with the preliminary knowledge needed for this lionhearted endeavour by equipping you with a list of the most valuable salvageable used car parts that can be sold.

It should come as no surprise that this is at the top of the list. Selling at as high as $7,000 to $15,000, a functioning engine is the most valued asset in a car that’s about to be scrapped. Get a trusted and experienced mechanic to inspect and properly dismantle this heavy part for you as the process can be fairly complicated and risky.

If you don’t manage to sell the engine block whole you can sell its other coveted parts individually. These include large components such as the engine cylinder block, the engine cylinder head, and smaller parts like the crankshaft and camshaft. Other individuals seeking to rebuild their damaged engines will make use of these parts and buy them off you.

What if the mechanic’s verdict is that your engine’s no good? Then sell it as salvageable aluminium. We did mention that this part is heavy, right? That’s around 160 kgs (for an average sedan) worth of valuable metal… I’d say that’s a decent exchange for an item that would otherwise have no other use.

But also be aware that more often than not, individuals that are headed towards replacing their car engine will opt for selling the whole car instead. Engaging in engine repairs is usually very troublesome and costly, so people tend to avoid it altogether. As such, finding a buyer for your used engine may be difficult. Selling your used engine may only be a feasible option if the car model that you’re selling the part of is widely spread in your region or is a highly sought after or rare vehicle. Although more applicable to the engine, this concept should be at the back of your head for any other used vehicle part that you intend to sell.

–Did you know that car owners in the UAE are known to import used car parts from India? That’s a long way!–

Now, this is a good market to be in. Predictions set the car transmission market to be worth $130.25 billion by 2026. A car’s transmission is one of those parts that need to be in tip-top shape for the car to even function. That’s because the part itself is made of an uncountable number of other smaller intricate parts. If one of them fails, then the whole thing does. Making this part highly sought after.

Finding a good mechanic to dismantle this intricate car part is doubly important for obvious reasons. Similar to the engine, this part too can be sold as aluminium scrap if worse comes to worst.

Whole AC system repairs or replacements can cost anywhere from $1,000 to $4,000, although used bits and pieces will cost drastically less, this is a very important component of the car, and any sane driver will jump at the opportunity of buying cheaper AC parts that are in good condition.

This is another highly sought after piece. Incidents of thefts when it comes to catalytic converters are rapidly rising. According to research, on average 5,000 catalytic converters are stolen on a monthly basis in the US, and that’s only what’s been accounted for. If you’re not familiar with this part, it’s a crucial piece of the cars exhaust system and is in charge of reducing air pollution. It can be found on the undercarriage of your car. It’s a highly salvageable part due to the precious minerals that can be found in it such as platinum, hence all the thievery. On average, this part can cost anywhere between $800 to $1,200.

When you’ve salvaged all of the above components, there’s still more to be done and still more money to be made. Although each of the following items may not be worth much individually, together they can really pack a punch.

This is part of the cars outer body. Found on the side of the vehicle and above the front wheels, these metal sheets found on both sides of the vehicle can cost quite a lot. People that have damaged their fenders in an accident and are in the market for a new replacement are usually presented with many cheap but lower quality parts that utilize weak materials. The other alternative is the car dealer who charges ridiculously large amounts. Imagine these shoppers’ excitement when they find an original fender at a reasonable rate.

Car scrapyards won’t pay you extra for your functioning GPS system, but they WILL make use of it themselves and resell it at a profit. So why not do the same yourself? Get a competent car electrician to remove it for you at a fair price and sell it to your local car repair shop or someone with the same vehicle model.

Brake pads can usually be found on the two front tyres of your car and are one of the replaceable parts of your car that last very long. So if your pads are reasonably thicker than 0.24 inches (the minimum thickness before new pads are in order) then you can make a few bucks selling them, especially if they’re of high quality.

There are so many ways to go with these. You can sell the whole thing, that is your wheels with the tyres on — if they’re in good condition. If your wheels aren’t sellable then you can sell them as aluminium. You can also sell your tyres separately if their tread depth is at a safe and functional level (above 2/32”), there’s a huge market for that. Search for a used tyre shop or go to the Sharjah used car parts market where you can also sell other parts.

Alternatives to Selling Your Used Car Parts: Sell Your Motors ™

Does the car parts salvaging industry still intimidate you? Do you maybe feel a bit unwilling to go through with the process because of all the complexities you might face? Your feelings are perfectly justified, and they are one of the many reasons why we exist — to make a complicated process simple all the while providing you with a good deal. What do you have to do? Close to nothing! We take care of it all and buy the scrap car from you whole. All you have to do is try our free online car valuation and we’ll get back to you, or you can call us directly on 04 330 1030

If you’re considering buying a new car, have a look at our top 5 cars with the best resale value UAE list. And if you enjoyed this blog, then you might also enjoy our other blog about the 5 most expensive car parts.