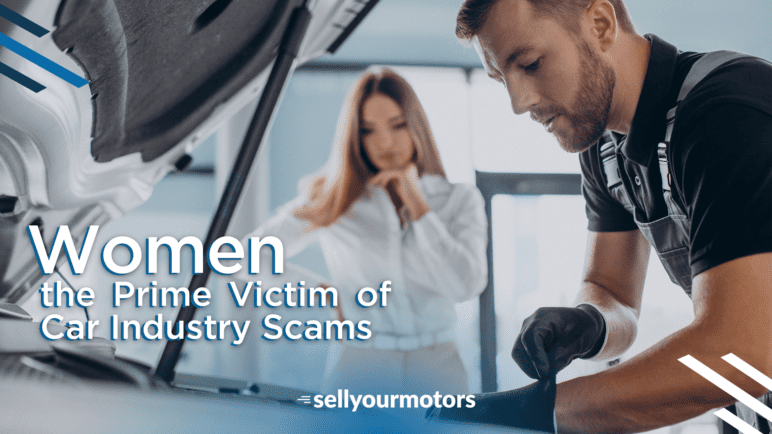 The automotive industry is riddled with shifty figures and sleazy salesmen. They prey on anything that moves on four wheels — especially if it’s driven by a woman. This male-dominated industry thrives on “knowledge is power” as a maxim. Making anyone who’s not… well, a mechanic, a weak person, and hence putting women at the bottom of the food chain.

A 90s study that sampled 300 individuals, found that women were consistently charged higher prices at car dealers. A subsequent study in 2000 found out that this discriminatory pricing style extends well into the auto-parts industry as well.

In this article, we highlight a few women car scam stories for the weary car owner, not with the intention of frightening them, but rather to inform and educate.

If you dread going to your mechanic whenever it’s time for your routine oil change because of the ridiculous amount of (and seemingly unnecessary) repairs your mechanic prescribes you, then that’s exactly how Patrice Banks felt.

The Fortune 500 company engineer turned mechanic thanks to the shady characters in the car repair business for her new profession. Going for a $20 dollar quick service, but coming out $300 poorer wasn’t a lifestyle Patrice wanted to get used to.

Patrice tells of a time where her two-year-old SUV’s dashboard was flashing. Upon an inspection at her dealer, she was told the car had a problem with its transmission, and that it would cost $1,800. The dealer kept her car for two weeks, and when it was returned, the car would shake when put in reverse. Eight months later the same problem happened again, and habitually another $1,800 was asked for.

What started as a simple dashboard light flashing, quickly escalated into an ever-growing problem. Since then Patrice stopped engaging in hefty car repairs and instead sold her car to buy a new one whenever such a heavy repair was required.

Sometimes even experienced females get the short end of the stick. This next story comes from rural southeastern USA. Ashley Garling, who grew up changing her own car’s oil and spark plugs, as well as attending drag races on the regular, was ready to buy the car of her dreams. She contacted the dealership and was given a quote, but on her arrival at the dealership the price had conveniently gone up by more than 55%. The salesman would not budge, and the price that was initially negotiated was completely disposed of. She eventually brought it down to 30% more than the originally negotiated price and made the purchase. The saddest thing about it all? Ashley’s husband had bought the same exact car at the initially quoted price, only months prior. It turns out that that dealership had a reputation for being dodgy.

On an episode of ABC’s The Lookout, a female mechanic was dressed as an unsuspecting female and sent to a chain of mechanic shops. The catch? Another man would be sent to the same shops, days prior, using a car that was identical to the females with the exception of different body colours. Both vehicles were new.

However, an inexpensive fuse responsible for the windshield wipers was intentionally broken on both cars. A part that only costs $4. Cameras were fitted into the cars and on the individuals, and the scene was set.

When the man entered the shop, the mechanic was quick to fix the fuse and pointed out the man’s squeaky clean air filters. The bill came down to $85 inclusive of parts and service.

With the female, however, the fuse was fixed, but instead, she was told that her car had a wiring problem under its hood. The bill? $170. She was then recommended a PCV Valve change, that’s another $50. And then a filter change, add another $25.

Wait… what? A filter change? The squeaky clean filter that’s identical to the male actor’s filter? Yes, that one. Unnervingly the hidden cameras caught the mechanic switching the brand new filter for a dirty one and then suggesting a new filter be bought. The funniest thing about it all is how he “transparently” presents the female with the bad parts at the end of the ordeal.

Well, to his demise a trusted mechanic later verified that the valve was never changed and that the bad part that was presented to the female actor was in fact not even the right part for that car model. Furthermore, the car’s wiring was never touched.

Shockingly, the three other shops that the show’s crew visited all recommended repairs that experts deemed unnecessary to the female actor.

Sell your Motors is a car buying service in the UAE. We buy any car from you at an incredible speed. At Sell Your Motors we pride ourselves on delivering a non-discriminatory and (above all else) FAIR service. No gimmicks, no tricks, and no terrifying switches; just a good ol’ fashioned business transaction.

Our process is simple: first, you can try our free online car price estimator to get an idea of what your car might be worth, then you’ll receive a call from us to schedule a car inspection, after the inspection, we present you with an offer. Give us the keys and we’ll give you the cash. The best part? The whole process (from inspection to finalizing the paperwork) only takes 30 minutes.